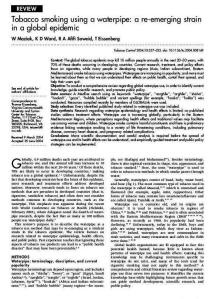 In the open English biomedical literature (*), the following “review” is the most flawed and most erroneous article ever published on ««waterpipe»» smoking in one decade:

It is the mother of the hundreds of biased politicised publications that would follow over the past decade. Why? Because it was authored by the same people who would prepare the WHO flawed report which appeared one year later [1].

Few researchers (we mean honest researchers) know that it actually served as the basis for the WHO flawed report. So, one can have a first idea of the world fuelled confusion.

Among the so many errors (“lies” would be more appropriate), let us quote, for memory, those about the risk of lung cancer, bladder cancer, aspergillosis whereby the authors of the related studies were credited in that “review” for the opposite of their conclusions [2-4].

In spite of such a gross manipulation of the research community, such a “review” has been cited at least 200 times by naïve (?) researchers from all parts of the world; and this is more surprising, not only from the “West” but also Middle Eastern countries.

The only explanation for this is that ignorance -in a field where given researchers are expected to display high skills (since the matter relates to social and cultural aspect of their own societies) is prevalent. And this was the objective of the operation as during the psychological operations of mass brainwashing preparing modern wars.

Certainly such a “publication” did help their antismoking authors in blowing up their curriculum vitae (according to the US saying: “publish or perish”…). This said, if you add the confusion fuelled by the WHO calamitous report which built upon such a stuff, to:

-that of the calculated over-citing of it (by their colleagues in a world crusade against the Middle East Peace Pipe virus) and, not the least;

-that of the inauguration of the very antiscientific ««waterpipe» term (actually a reductionist and nominalistic neologism apart from being a sociological and editorial war codename );

then you can have a broad idea of the global confusion, never reach in the history of biomedical research, as demonstrated in a Letter published in the British Journal of Cancer [5].

Note (*): We say “English” because there is in French a ««book»» (actually plagiarised material) which represents the greatest fraud in the history of tobacco research:

behind the greatest manipulation & confusion of all times in biomedical research…

The MEPP cannot be but “dangerous”…

Thanks to “Plot Theorist” Edward Snowden

for exposing the greatest totalitarianism of all times (email snooping of all citizens of the world…): "I do not want to live in a world where everything I do and say is recorded”

“No one shall be subjected to arbitrary interference with his privacy, family, home or correspondence, ... Everyone has the right to the protection of the law against such interference or attacks.”

Most Govts Silent ’cause Doing the Same…

My journey with Parkinson's ... a natural approach!